I used to be a know-it-all

But then I had my own kid and realized that I don't know anything about anything. Ahh, humility.

I know that I have written before about things I never thought I'd let my kid do and how judgmental I used to be about other parents, and you would think I would have learned my lesson, but NO. I continue to judge. Just the other day, I heard about a family who has a one-year-old who still wakes up multiple times a night, and I thought, "That sucks. They should just let him cry." Then I relaized that I have a one-year-old (next Thursday) who does the same thing. I am such an asshole.

Before Harry was born, I used to think people who slept with their kid were total weirdos, and I also used to think their marriages must be in the toilet. I would say "Can't they just let the kid cry?" Or "There's more between them in bed than just the baby." And I read message boards with people talking about Cry It Out and how their kid slept through the night at like 4 months, and I thought "That'll totally be me."

My marriage, first of all, is so totally not in the toilet (right sweetie?) even though Harry is in our bed. Cry It Out is so totally not for us, unless I misundertsood the point, and we are supposed to be the ones crying. And sleeping through the night? That's so totally not who Harry is.

THIS is who he is: 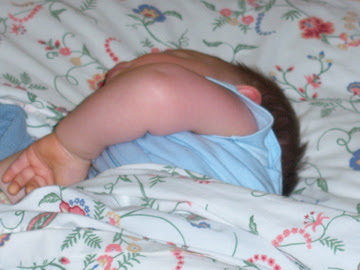 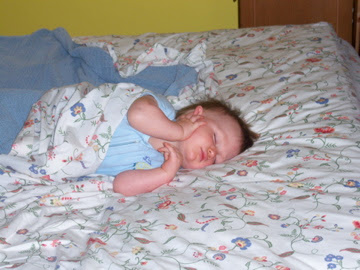 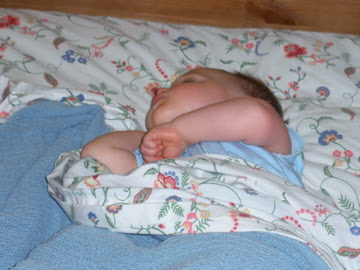 Hard to resist co-sleeping when this is the first thing you see upon opening your eyes.

Notice, though, where he sleeps. Directly in the middle. Before we have another baby, we'll need a bigger bed.

I'd like to say that I am less of a Sanctimommy these days, but I think I'm just kind of a judger by nature. I know-- you're all shocked, right?

Take the Tuesday Harry Times Poll of the Week!!!
Posted by Sarah at 1:14 PM

Your sheets are so pretty! Where did you find them?

And I totally know what you mean. I respond to every whimper. Of course if I respond quickly enough, he usually goes back to sleep. :) And he's not technically sleeping through every night either. So so sleepy.

It seems to me that the thing you were judgmental about was a kid licking the smashed bugs off the front of the car! I don't recall that I allowed the kids to do that either! For one thing, the car gets pretty hot. The kid could burn her/his tongue (although the bugs might be cooked, which is good...)
I was looking at an old edition of Dr. Spock earlier today, and I think the message that comes through the best is "Trust yourself and trust your baby." I don't think you can go wrong that way.